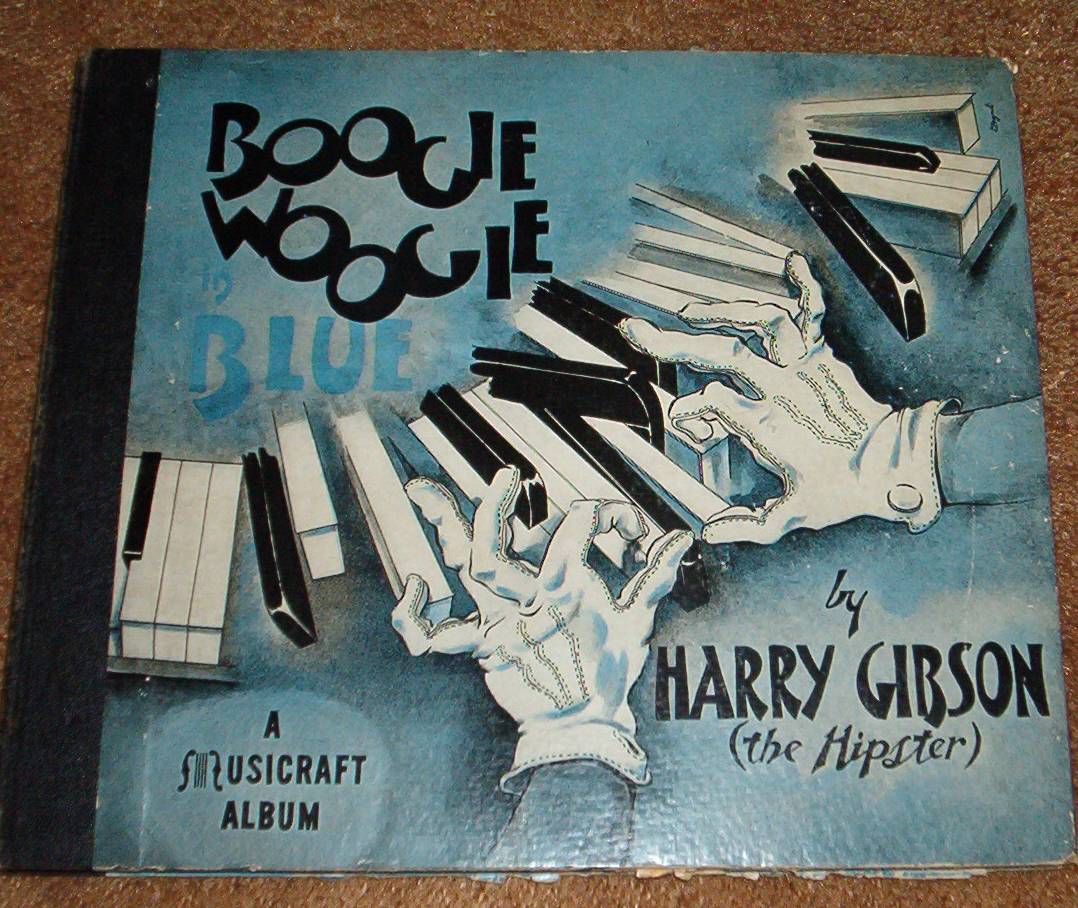 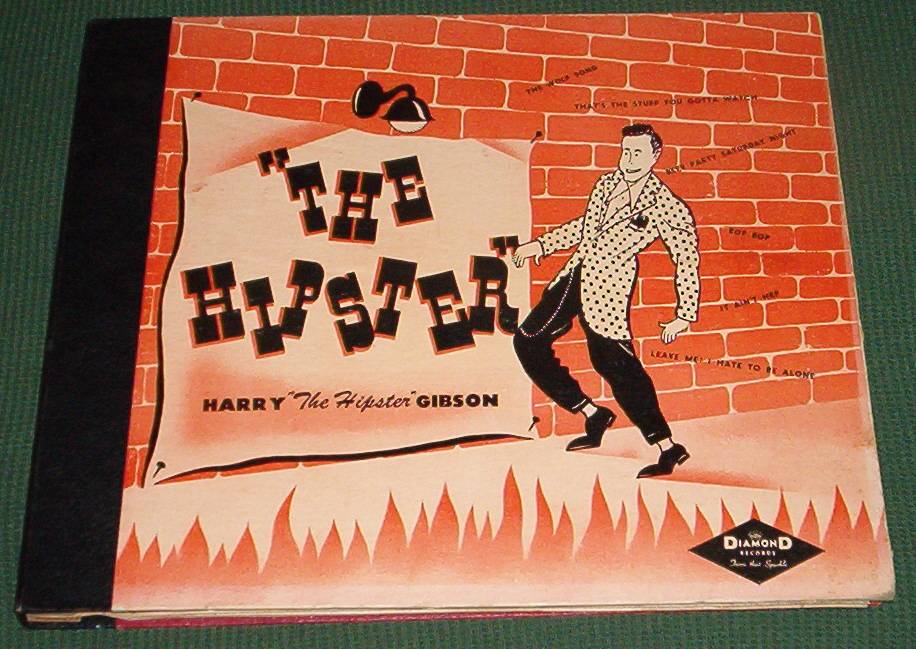 But most impressive are the "soundies" he did in NYC, which contain footage of probably the first white guy to play and sing in a rock and roll style, with slicked back hair, unrestrained wild singing...and this was 10 years before Elvis ever set foot in a record studio. All 3 of his soundies were filmed in April, 1944. Before this, piano players, even the hard-rocking boogie pioneers like Pete Johnson and Albert Ammons, were sitting upright and playing like gentlemen. But these films show The Hipster, stomping at the piano and standing on the bench to rock the 88's, 10 years before Little Richard or Jerry Lee Lewis. As you watch them, you have to keep reminding yourself that this is really 1944 footage and that this is not rock and roll of the 1950's. The only thing different, if this were the 1950's, is that he would be wearing blue jeans and a white tee shirt instead of a zoot suit, but musically, it's the 1950's in 1944. Far from being a primitive version of rock and roll piano, Harry's music came out of the slick jazz world, and his musicianship was superior to the clumsy piano smashing of Jerry Lee Lewis or others in the 50's, but he rocks just as hard if not harder. His high level of musicianship shows that his teachers were the greats such as Fats Waller and many of the other top Harlem pianists. This is really amazing stuff!

Below is the inside cover of the 1944 album "Boogie Woogie in Blue" which contains several rockers if you have a 78 RPM player in your house. Click here for zooms of it. 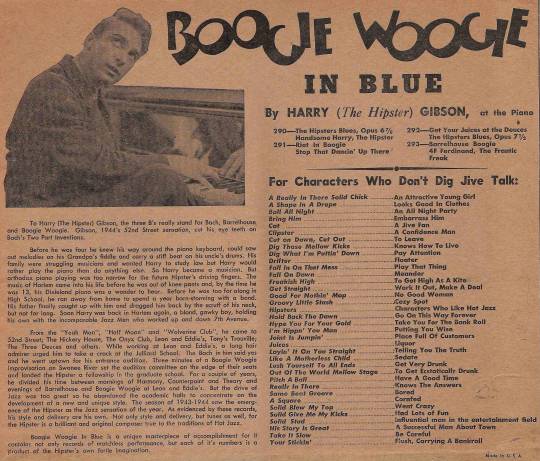 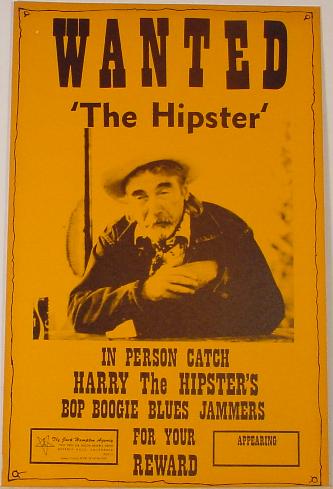 Harry the senior citizen hipster in the 1980's

Hipography (records only, does not include radio transcriptions or Euro-bootlegs of existing recordings)

"The Hipster," album of 3 singles (6 sides), Diamond Records, album D9
THE WOLF SONG -DIAMOND 2065
THAT'S THE STUFF YOU GOTTA WATCH -DIAMOND 2065
BOP BOP -DIAMOND 2066
BEER PARTY SATURDAY NIGHT -DIAMOND 2066
IT AIN'T HEP  -DIAMOND 2067
LEAVE ME! I HATE TO BE ALONE -DIAMOND 2067
(Feb. 12 & 13, 1947, NYC) Al Hall, bass; Morey Feld, skins.
[note: songwriting credit for all 6 of these songs went to one Irvin Rose. It was common in those days for record label owners to claim songwriting credits
for themselves, usually under a pseudonym, so they could avoid paying royalties. Diamond was owned by Irving R. Gwirtz. We can be sure Harry wrote them!]

ROCKIN' RHYTHM  -SUTTON 313 CAUTION, BOOTLEG
(This is a 1950's or 60's bootleg LP containing 3 of the 1944 Musicraft sides dubbed from scratchy 78's, and 5 other songs that are not Harry at all. Avoid this shameless bootleg).

"BULLDOZERS FROM JUPITER"  -D25Z-2
(April 28, 1989) This album by Crash: Jeff Silvertrust Quintet, contains one song played and sung by Harry, "Get Hip To Shirley MacLaine."

In addition to the above records, there were live radio shows. Harry was on the radio a lot in the 1940's, doing live performances and skits, or his performances in clubs were broadcast. Many of these shows were recorded in some form or another.  In addition, there were studio recordings made by radio programming companies specifically for airplay. This list is certainly incomplete, but it lists 21 of his radio shows that were recorded. Some of these are available now on CD, but most require that you locate the radio transcription yourself. Radio transcriptions from the 40's were usually giant 16-inch diameter vinyl (not shellac) phonograph records which were too big for normal record players. The special 16-inch turntables were something that only radio stations had. In the late 40's, radio transcriptions started being done on tape.

The Armed Forces Radio Service (AFRS) transcriptions.
These radio shows were recorded for the Army/Navy/Marines for rebroadcast by military radio stations overseas.
The Jubilee Shows were done weekly at Billy Berg's Rendezvous on Vine Street in Hollywood, CA, other shows recorded elsewhere.

1. The Connee Boswell Show. April 12, 1944. Blue net origination, AFRS rebroadcast. Harry Gibson plays a hot boogie of "Pig Foot Pete" with his own lyrics. The cast does a skit called, "Is There A Doctor In The House?" Connie Boswell, Harry The Hipster Gibson, Jack Pepper, Paul Whiteman and His Orchestra. 30:00.

4. Jubilee. October 1, 1945. Program #150/224. AFRS origination. Recorded live at Billy Berg's in Hollywood, CA. The date above is the date of recording. Count Basie and His Orchestra start the program with, "San Jose." Lena Horne sings, "One More For My Baby" for the first time on the air. The show was previously issued as program #150. Count Basie and His Orchestra, Ernest Whitman (m. c.), Harry The Hipster Gibson, Lena Horne, The Slim Gaillard Trio, Verne Smith (announcer). 29:52 Harry sings "Whose Going Steady With Who?" acc. by Jack Lesberg on bass and Johnny Blowers on drums.

7. Jubilee. November 13, 1945. Program #156. AFRS origination. Recorded live at Billy Berg's in Hollywood, CA. The date above is the date of recording. The first tune is, "Southern Scandal." This program may have been recorded from a "Command Performance" or "One Night Stand" program. Ernest Whitman (m. c.), Harry The Hipster Gibson, June Christy, The Oscar Pettiford Trio, Stan Kenton and His Orchestra, Hugh Brundage (announcer). 1/2 hour. Gibson does a comedy skit with June Christy and Whitman, then sings, "Slender, Tender, and Tall" which he announces as "Slender, Tender, and Groooovy." Then Harry and Stan Kenton do a duet of "Down The Road A-Piece."

11. The Rudy Vallee Show. January 11, 1946. Program #65. AFRS. The first tune is, "Welcome." Rudy has the hiccoughs, a visit from tough-guy Ladd. Rudy does his monologue about taxi drivers, it's called, "Where To?" The AFRS fill music has been deleted after the system cue. Rudy Vallee, Alan Ladd, Pinky Lee, Harry The Hipster Gibson, Bennie Krueger and His Orchestra, Truman Bradley (announcer), Betty Bradley, Edward Marr, Lois Corbett. Harry sings "Who's Going Steady With Who." 29:32.

13. The Henry King Show. 1947. Program #47. C. P. MacGregor syndication. Music fill for local commercial insert. "The Regal Rhythms" of Henry King, his piano and orchestra. The first tune is, "Tea For Two." The program's guest is Harry "The Hipster" Gibson. The date is approximate. Henry King and His Orchestra, Eileen Dean (vocal), Harry The Hipster Gibson, Charles Arlington (announcer). Harry sings "The Gambler's Song" and "Stop That Dancing Up There." 29:58.

The MacGregor Transcriptions.
These recordings were made in a studio in 1947 for broadcast by the AFRS at military bases or other radio stations. Unlike the AFRS live radio shows, these were not recorded in front of an audience.
These recordings were not released on records for consumers, they were only released on giant 16-inch transcription records, 33 RPM, usually 4 songs per side, for radio stations to play.
See below for photo of an AFRS 16-inch record.

Harry appeared live on Dr. Demento's radio show, program # 10, September 8, 1974, and did an interview while Dr. Demento was playing some of Harry's old records.

Harry appeared live on Dr. Demento's radio show,  program # 93, May 9, 1976, and did another interview, but also played "Stay Demented" and "Riot In Boogie" live on the show, backed by the Rock Boogie Blues Jammers. The recordings were replayed on the show several times on later dates. 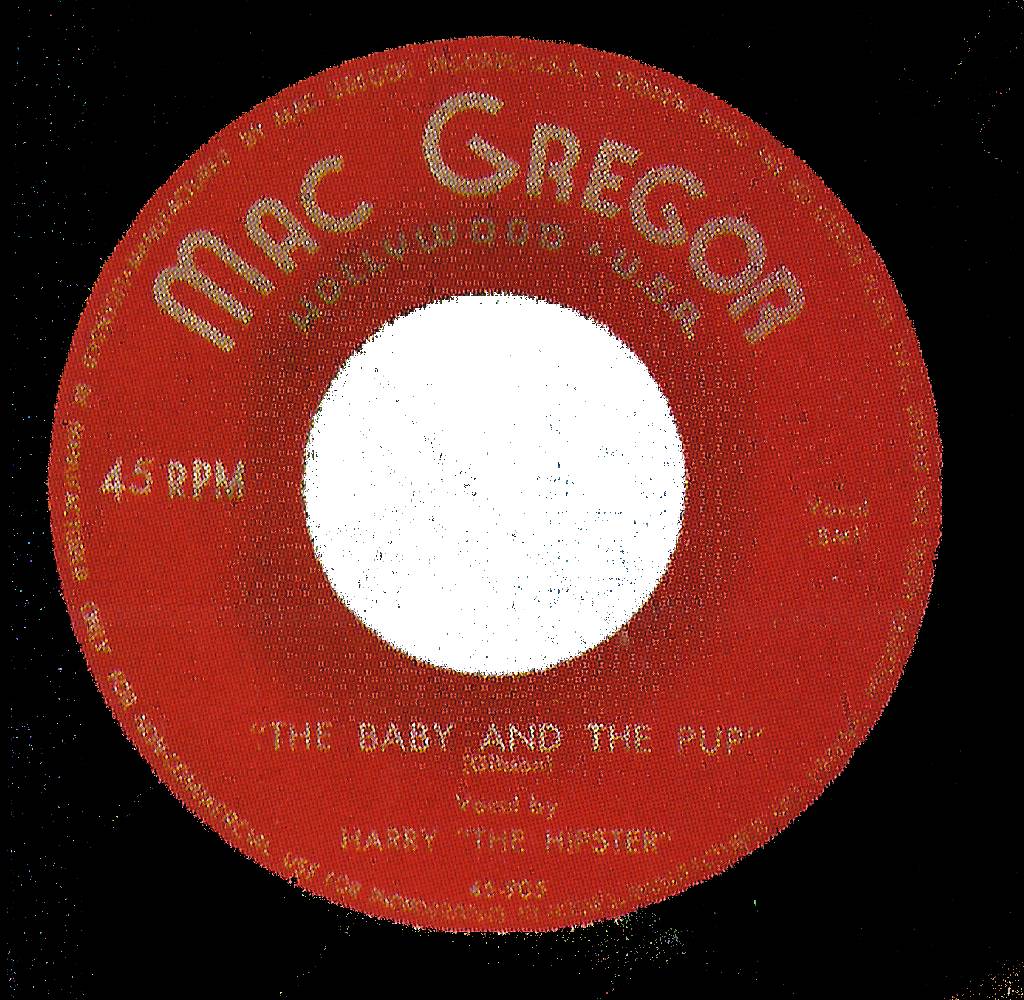 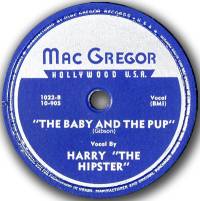 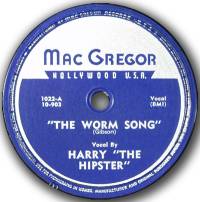 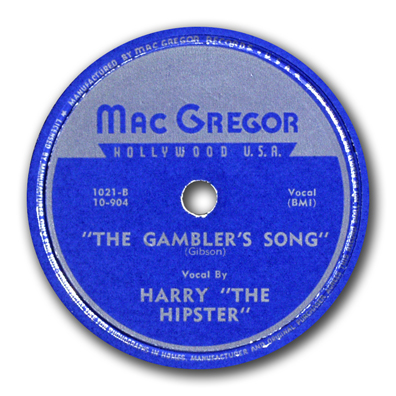 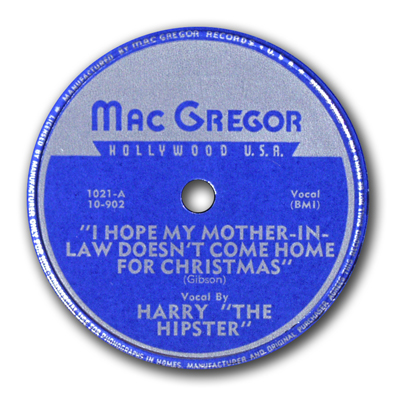 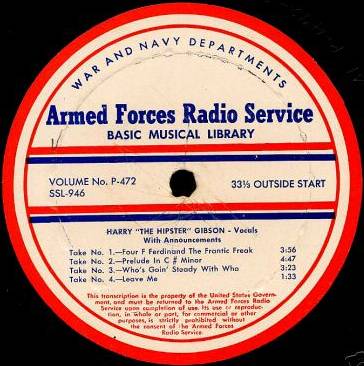 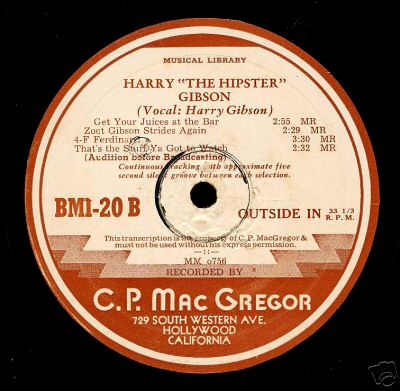 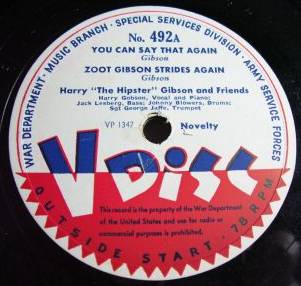 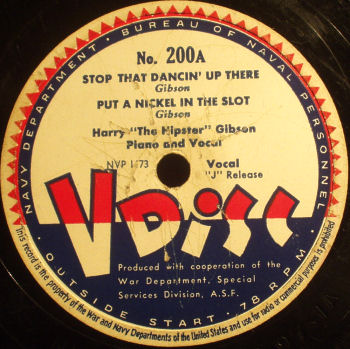 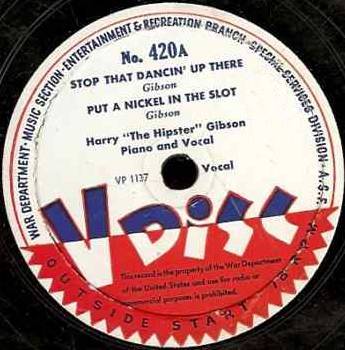 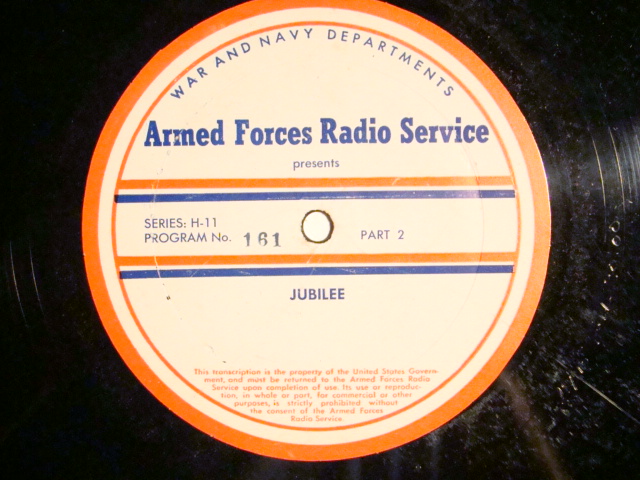 In addition to his records, Harry published some sheet music in 1946, "Sextette for Boogie Woogie." 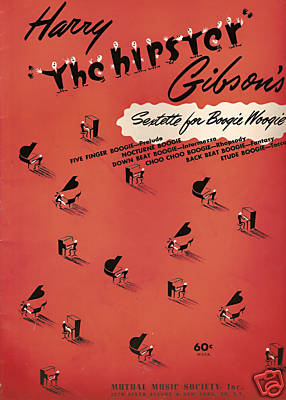 An essay about Harry The Hipster by Richard Marcus

Essay about Harry by Dan DeMuth

Essay about Harry by Morgan Wright

Harry was featured in 2009 in Blues And Rhythm magazine. Click below. 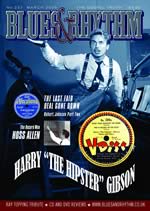 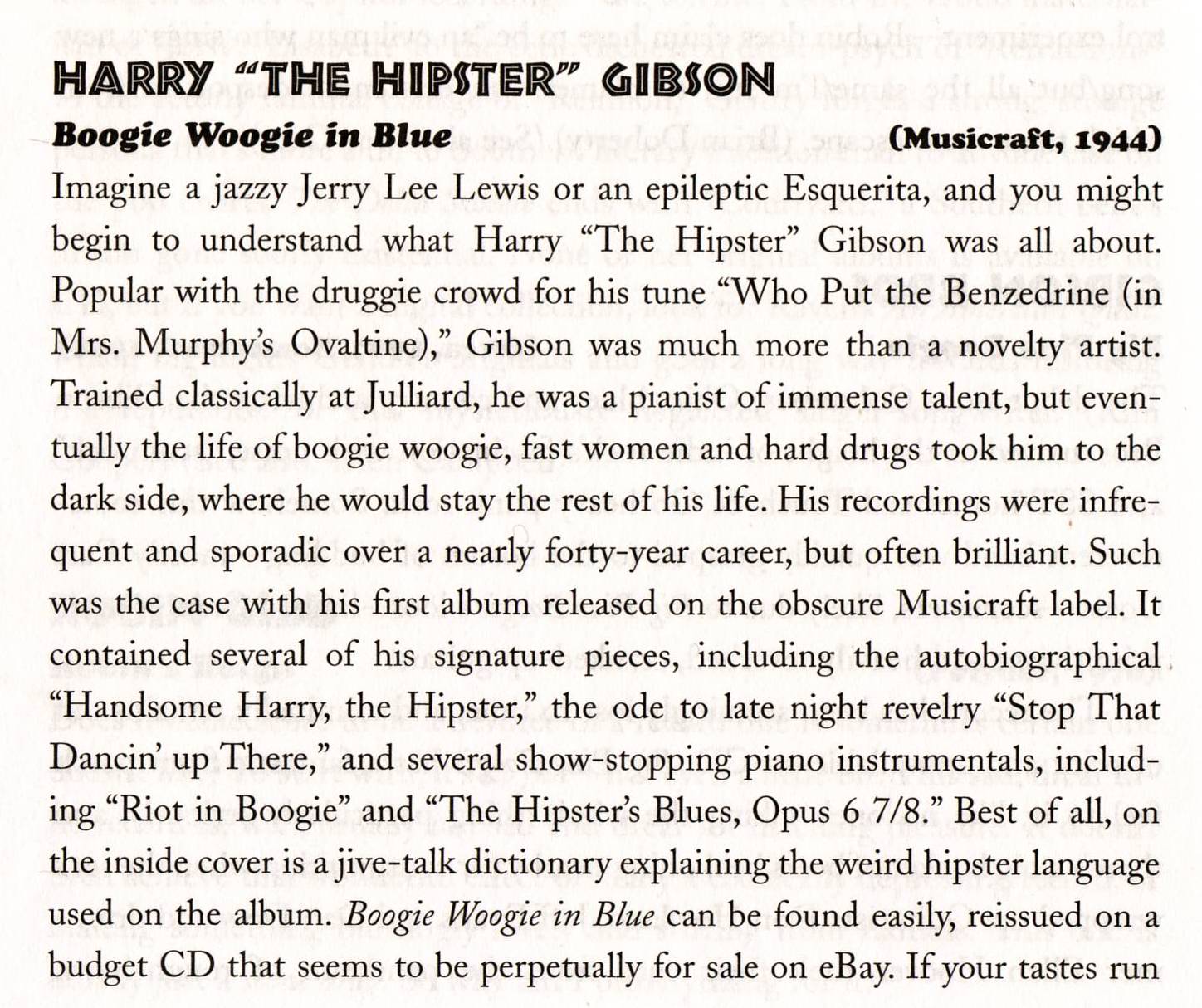 An email from a neighbor in Florida

Harry has his own myspace page